The first review of "Viral" is out and it ain't pretty 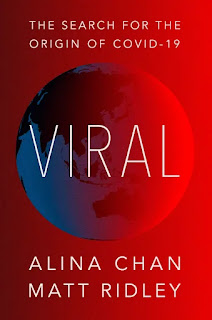 Michael Hiltzik is first off the mark writing for the Los Angeles Times: These authors wanted to push the COVID-19 lab-leak theory. Instead they exposed its weaknesses.

Hiltzik is one of the few science writers who know what they'r talking about.1 You should read his entire review—here are some excerpts to tempt you.

... “Viral” is a laboratory-perfect example of how not to write about a scientific issue. The authors rely less on the scientists doing the painstaking work to unearth the virus’ origin than on self-described sleuths who broadcast their dubious claims, sometimes anonymously, on social media. In the end, Chan and Ridley spotlight all the shortcomings of the hypothesis they set out to defend....

“Viral” is built on vague innuendo, dressed up with assertions that may strike laypeople as plausible but have long since been debunked by experienced virologists. An entire chapter, for example, is devoted to the “furin cleavage site,” a feature of the virus’ structure through which the enzyme furin makes the spikes on its surface — which it uses to penetrate and infect healthy cells — more effective.

The furin site was originally described by lab-leak advocates as so unusual that it could have been placed there only by humans. Virologists have since determined that the feature is not all that rare in viruses similar to SARS2, and in any case, it could have emerged through natural evolutionary processes well known to experts. Chan and Ridley place a heads-I-win-tails-you-lose gloss on these findings, writing that if the site “proves to have been inserted artificially, it confirms that the virus was in a laboratory and was altered. ... If, on the other hand, the furin cleavage site proves to be natural, it still says nothing about where the virus came from.” Why write about it at all, then?

Alina Chan's reputation is already about as low as it can get and now it looks like she's dragging Matt Ridely down with her. He was already part way there so he didn't have far to go.

The book is published by HarperCollins. Should American lawmakers look seriously at regulating the publishing industry for spreading misinformation since they're already investigating Facebook for the same crime?

1. See: Is the media finally realizing that they have been duped into promoting the lab leak conspiracy theory?.