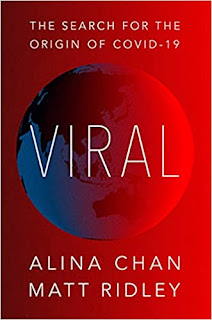 Harper is set to publish Viral: The Search for the Origin of COVID-19 in just a few days. The authors are Alina Chan, a postdoc at the Broad Institute of MIT and Harvard, and Matt Ridley, a science journalist who has written several respectable books.

The book promises to reignite discussion of the lab leak conspriracy theory with a focus on Alina Chan's role in promoting it. In preparation, you should read this article about her: They called it a conspiracy theory. But Alina Chan tweeted life into the idea that the virus came from a lab.

I'm curious about someting else. The book deal was signed less than six months ago so it's clear that Harper has rushed it into print. That's a lot faster than my book is taking and a lot faster than the books by several other scientists. My publisher insists on a rigorous review of my book to make sure the science is accurate and other scientists have had similar experiences. In my case, the reviews will take three months.

I wonder who reviewed the Chan/Ridley book and told Harper that the science was accurate and the book should be published? I think we all know the answer. I'm guessing that this book will contribute to the mistrust and undermining of science that's common in today's society and that Harper will not be criticized for contributing to that mistrust. Instead, they will be praised for making tons of money from gullible book buyers.

Here's the Amazon blurb that Harper has written to promote the book. Judge for yourself whether this is real science or hype masquerading as science.

A new virus descended on the human species in 2019 wreaking unprecedented havoc. Finding out where it came from and how it first jumped into people is an urgent priority, but early expectations that this would prove an easy question to answer have been dashed. Nearly two years into the pandemic, the crucial mystery of the origin of SARS-CoV-2 is not only unresolved but has deepened.

In this uniquely insightful book, a scientist and a writer join forces to try to get to the bottom of how a virus whose closest relations live in bats in subtropical southern China somehow managed to begin spreading among people more than 1,500 kilometres away in the city of Wuhan. They grapple with the baffling fact that the virus left none of the expected traces that such outbreaks usually create: no infected market animals or wildlife, no chains of early cases in travellers to the city, no smouldering epidemic in a rural area, no rapid adaptation of the virus to its new host—human beings.

To try to solve this pressing mystery, Viral delves deep into the events of 2019 leading up to 2021, the details of what went on in animal markets and virology laboratories, the records and data hidden from sight within archived Chinese theses and websites, and the clues that can be coaxed from the very text of the virus’s own genetic code.

The result is a gripping detective story that takes the reader deeper and deeper into a metaphorical cave of mystery. One by one the authors explore promising tunnels only to show that they are blind alleys, until, miles beneath the surface, they find themselves tantalisingly close to a shaft that leads to the light.