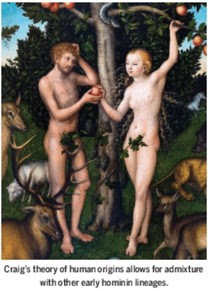 You can't get much more anti-science than a book about Adam and Eve. Nevertheless, Stephen Schaffner—a computational biologist at the Broad Institute of MIT in Boston—decided that such a book was worthy of a mostly favorable review in one of the most prestigious science journals in the world [Adam. Eve, and the evolution of humankind].

Schaffner is reviewing a book by William Lane Craig whom he describes as "a widely published philosopher, theologian, and Christian apologist." There are others who would dispute that laudatory description including Richard Dawkins in a ten-year-old essay published in The Guardian [Why I refuse to debate with William Lane Craig].

I won't bother to mention all of the issues with the review since Jerry Coyne has covered them on his website but I would like to quote part of the second-last paragraph of the review.

Craig’s goal in writing this book, of course, is not a scientific one, and it cannot be judged on scientific grounds. I suspect that for many scientists, including religious ones, the exercise will be seen as misguided or simply incomprehensible.

Having followed Craig's anti-science crusade for several years, I have no difficulty in understanding why he would write such a book. What I find truly misguided and incomprehensible is why Science would publish such a review. Perhaps it's because AAAS, the publisher of Science, has a history of accommodating religion?