Do scientists write books for the "casual reader"? 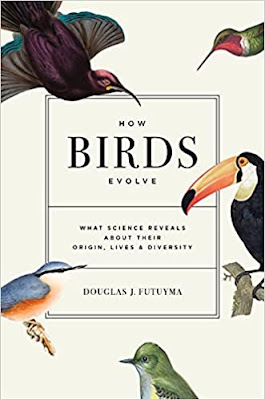 I just read a review in Science of Douglas Futuyma’s new book How Birds Evolve: What Science Reveals About Their Origin, Lives, and Diversity. [Contextualizing avian origins and evolution]. Many of you will be familiar with Futuyma because he’s the author of one of the best textbooks on evolution.

Right after reading the review, I signed on to Amazon intending to buy the book but when I saw the price ($95 Cdn) I had second thoughts. Much as I’d like to see how Futuyma handles a complex topic like bird evolution, I don’t think I want to spend that much money.

But there are parts of the review that I find intriguing enough to address because they relate to my concern about science writing. Here’s the first thing that caught my eye. The reviewer, Alan Feduccia, writes,

Although casual readers might find the text somewhat advanced and laborious, the chapters are composed in well-written conversational prose, with expositions on multifarious evolutionary phenomena that are infused with scientific explanations.

This highlights an issue that I’ve been writing about recently. "Casual readers" are not going to buy this book and I’m confident that Futuyma is not writing for casual readers. What’s the point of saying that such readers might find the book "advanced and laborious"? What I want to know is whether the actual intended audience would find the book laborious.

The reviewer goes on to describe some of things that are in the book.

Futuyma’s discussion begins with a section that explains Charles Darwin’s transformative ideas—from natural selection and fitness to brood parasitism to gene flow and genetic drift—and thematic chapters elaborate on the relationship between these ideas and bird lineages. The book describes complex evolutionary issues in understandable terms, ...

That sounds like the kind of science writing that I admire. We should aim for explaining complex issues in terms that are understandable to an audience that is prepared to buy the book. This may mean that the casual readers - who will never buy the book - are left out but that’s okay. It may mean that Futuyuma’s book is not going to win a Pulitzer Price for general nonfiction but that’s okay too since good science books are not high on the list of previous award winners.1 I’m pretty sure that scientific accuracy isn’t a prominent criterion in selecting award winners (in any category).

The reviewer is somewhat critical of the science in the book and takes Futuyma to task for promoting “just-so” stories and for not fully explaining the speculative nature of some of his conclusions. The reviewer notes that “controversy, not consensus, is grist to the mill of good science” and that strikes me as insightful. The problem is that writing about controversy and attempting to explain both sides of an issue are very hard to do and often in conflict with the emphasis on style that is promoted by science writers and editors.

1. Previous Pulitzer Prize winning books that might be counted as science books are: The Emperor of All Maladies by Siddhartha Mukherjee (2011); Guns, Germs and Steel: The Fates of Human Societies, by Jared Diamond (1998); The Beak Of The Finch: A Story Of Evolution In Our Time, by Jonathan Weiner (1995); The Ants, by Bert Holldobler and Edward O. Wilson (1990); and On Human Nature, by Edward O. Wilson (1979).