Will Ontario parents vaccinate their children?

COVID-19 vaccinations are soon going to be available for children in Ontario, Canada. Will parents vaccinate their children? 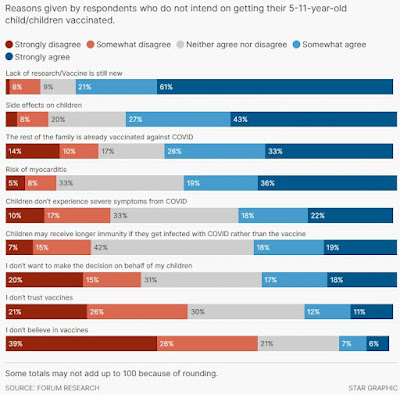 It's interesting to see the reasons parents gave for not vaccinating their children. 82% of these parents say that they don't trust the vaccine because it's too new and/or not enough research has been done. That's an illogical excuse because public health officials all over the world are recommending children's vaccinations and they wouldn't be doing it if there were any serious doubts about safety. The reluctance of these parents stems from the mistrust in public health officials and science that has been fostered by the media over the past eighteen months. The Toronto Star has been one of the worst offenders.

Some of the skepticism over decisions made by public heath officials is justified but the overall effect of constant criticism and nitpicking has been to undermine the authority of the very people we rely on to get us out of the pandemic. That's unfortunate.

The other problem for Canadians is that we are inundated with news from our neighbor to the South and that country really does have a bad track record. The somewhat more justified criticism of American public health officials spills over into Canada and taints our own physicians and scientists. That's also unfortunate.

Note that only 23% of these parents can be counted as vaccine deniers and since this group only represents 11% of the total surveyed, it means that the total number of those who don't believe in vaccines is less than 3% of the parents of children under 12. This is consistent with other surveys suggesting that the hard-core vaccine deniers represent less than 5% of the population.

I think the survey is very encouraging. It looks like most children will be vaccinated over the next few months. There will be holdouts but most of them will eventually give in to public pressure.