The case for a natural origin of SARS-CoV-2 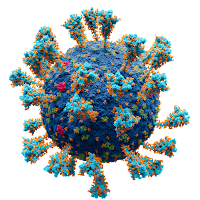 Lots of people seem to be confused about the origin of SARS-CoV-2, the virus responsible for the COVID-19 pandemic. The investigating committee ot the World Health Organization (WHO) concluded last winter that a natural origin is the most likely scenario but there still seems to be a substantial percentage of the population who think that the virus was being studied at the Wuhan Institute of Virology (WIV) and leaked from there to start the pandemic. This belief in a lab leak scenario persists in spite ot the fact that 21 expert scientists have discounted it and concluded that a natural origin is the best hypothesis. The lab leak speculation persists even when the United States intelligence agencies reached the same conclusion as the scientific experts and said that a natural origin was more likely.

I've published several posts on this topic over the past year trying to emphasize four points: (1) the evidence strongly favors a natural origin, (2) there is no scientific evidence to support the claim that the WIV scientists were working on SARS-CoV-2 before the pandemic started, (3) the most knowledgeable science experts agree that a natural origin is the most likely scenario, and (4) the media is misrepresenting the science and treating the two competing explanations as equivalent.

In this post I want to describe the case for a natural origin in as simple a manner as possible so that people can refer to the main lines of evidence and so that opponents of a natural origin can explain why they dismiss that evidence. I also want to briefly explain why we need to listen to the experts instead of arbitrarily dismissing their views as a argument from authority and assuming that our own research trumps the experts. 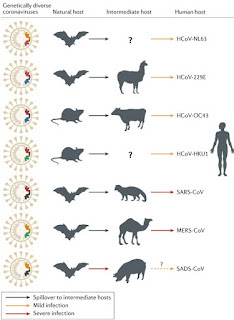 1. Other infectious coronaviruses have a natural origin

There are seven previously known coronaviruses that infect humans and all of them have a natural origin in either bats or mice. Five of them were most likely transmitted to humans through another animal such as camels, pigs, or cows. This does not prove that SARS-CoV-2 had a natural origin but it does lend strong support to the idea and it make us skeptical of claims that there's something special about SARS-CoV-2 that requires a different explanation. 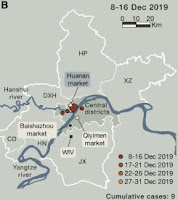 Most of the first infections in Wuhan were in people who frequented the wet markets suggesting that, at the very least, the market areas were the location of a superspreader event. There is no other location that seems to have been the source of a significant number of early infections. Of the three earliest cases, two were directly linked to the Huanan wet market. SARS-CoV-2 was detected in samples from the Huanan wet market itself although none of the animals that have been tested were positive for SARS-CoV-2.

There were two different SARS-CoV-2 lineages (A and B) in the early cases suggesting two independant events. Lineage B was found in the Huanan market and lineage A is associated with another market and with cases in other parts of China. Lineage B quickly became the dominant lineage worldwide. The data is consistent with a natural origin and spread from animals that were sold in these markets. 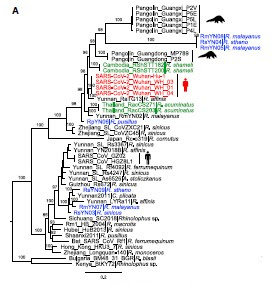 The first sequence of SARS-CoV-2 was published in early January 2020 and hundreds of other sequences, including all the main variants, have been published since then. Dozens of sequences of related bat viruses have been published including some of the closest relatives that have only been discovered in the past year such as BANAL-52 from bat caves in Laos. The standard reference sequence is 29,903 bp long and it differs from the related bat virus sequences at more than 900 sites.

By looking at the relationship between the full sequences, it is possible to construct phylogenetic trees showing the probable evolution of SARS-CoV-2. The data shows that SARS-CoV-2 clusters with a small group of bat viruses called the betacoronaviruses. This group includes a group of virus sequences recently identified in pangolins and it's quite distinct from the group that includes the original SARS virus that caused the 2002 outbreak.

In terms of the overall backbone sequence, one of the viruses, BANAL-52, isolated just a few months ago, is the closest match to SARS-CoV-2. It is much more closely related than RaTG13, the bat virus isolated from caves in China and sequenced by scientists at WIV. As a recent NIH reports notes, 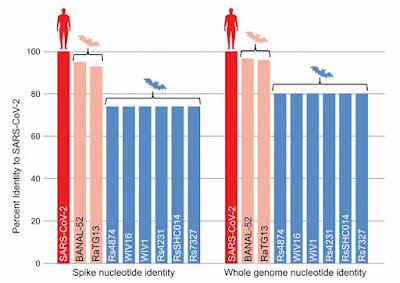 The data support a natural origin of SARS-CoV-2 from an unknown precursor that may have arisen as the result of a recombination event between two bat viruses. This pattern of evolution is quite common among bat coronaviruses and there's nothing in the sequence data to suggest an unnatural origin.

This is an important point. The sequence of SARS-CoV-2 has all the characteristics of a naturally evolving virus that has shared the same evolutionary history as its closest bat relatives. The data is completely consistent with evolution in a bat host for the past several decades (Deng et al., 2021). This is a pattern based on over 900 mutations that are not present in any of the other bat sequences that have been sequenced. Anyone promoting a non-natural origin has to account for this data.

Here are some links to the life cycle of coronaviruses and the SARS-CoV-2 sequence for those who want more information.

The argument from authority

Very few of us have direct experience in coronavirus evolution. There are hundreds of publications on this topic and many of the studies are well above our pay grade. We have no choice but to trust the word of others with more experience.

Here's the problem. Some scientific publications promote a natural origin of SARS-CoV-2 while others attempt to cast doubt on that scenario. On the surface, it looks like the experts disagree so there's no obvious consensus but appearances can be deceiving. There are far more experts supporting a natural origin but the minority promoting a lab leak hypothesis are getting a lot more press. This leads to a very misleading impression that's often echoed on TV by people like medical doctors who don't have a good grasp of how science works.

The fact that scientists disagree is not unusual.

I used to teach a course on critical thinking and one of the most important lessons was on how to tell which scientists (or science journalists) are likely to be correct. There are several important clues you can use when reading scientific papers or media reports.

The lab leak conspiracy theory has all of the characteristics of other anti-science attacks such as the creationists' attack on evolution and those who deny climate change. We should stop giving them publicity and we should not hesitate to point out their lack of knowledge.

Image Credits: The coronavirus figure is from Alexy Solodovnikov and Wikmedia Commons. The figure illustrating the origins of of coronavirus infections is from a review in Nature Reviews: Microbiology by Zheng-Li Shi of the Wuhan Institute of virology (Cui and Shi, 2019). The review was first published in December 2018 and it's where she warns of future pandemics caused by bat coronaviruses. The figure showing the location of the earliest infections in Wuhan is from Holmes et al. (2021). The phylogentic tree is from Zhou et al. (2021).