Electron transport supercomplexes in the mitochondria

The generation of ATP in mitochodrial membranes is driven by the energy from a protonmotive force caused by the movement of protons from a high concentration in the space between the inner and outer membranes and a low concentration on the inside of the mitochondria. The discovery of this mechanism, called the chemiosmotic theory, is due to Peter Mitchell, who won a Nobel Prize in 1978. It's one of the classic examples of a real paradigm shift because the mechanism completely changed the way biochemists looked at chemical reactions [Ode to Peter Mitchell].

The creation of the proton gradient is due to a series of oxidation-reduction reactions that involve the transfer of electrons from one molecule to another. The electrons pass down a chain of reactions from a relatively high energy molecule such as NADH to successively lower energy molecules and end up in water. As the electrons lose energy, the excess energy is coupled to the pumping of protons from the inside of the mitochondrion to the inner membrane space, creating a proton gradient. This gradient is what drives ATP production. 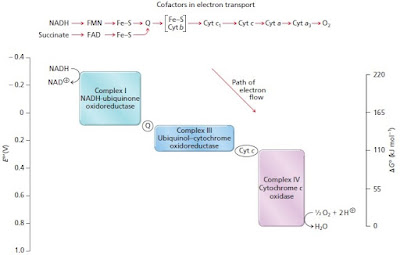 The structure and function of each of these complexes are usually described in separate sections of a biochemistry textbook because they are so complex but we've always known that they function together as an electron transport chain. When I first started writing this section of my textbook it was obvious that the three complexes would cluster together in the inner mitochondrial membrane and there was even some evidence to suggest that they were in close contact. The idea that they would form a well-defined supercomplex was hypothesized in the 1990s but the evidence was weak so it didn't make it into most textbooks.

The structures of Complexes I, II and III were eventually solved by X-ray diffraction studies of the isolated complexes but isolating any supercomplexes was difficult. With the advent of high resolution three dimensional electron microscopy one could finally see the predicted supercomplexes. The latest result, just published in Nature, characterizes the CI-CIII-CIV supercomplex from mammalian mitochondria (Vercellino and Sazanov, 2021). 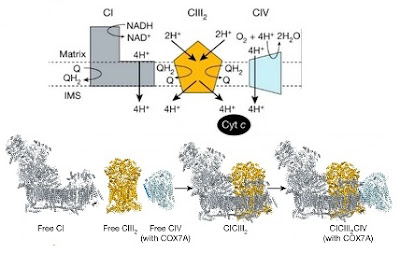 The nice thing about this result, and the earlier studies on supercomplexes in yeast and plants, is that it confirms earlier speculations that such complexes must exist even though the evidence was weak. It shows you that a deep understanding of biochemistry structure and function can lead to reasonable hypotheses than can be tested when the technology improves.

Image credit: The first image is a modified version of Figure 14.6 from Moran et al. Principles of Biochemistry, 5th edition. The second image is from Vercellino and Sazanov (2021).