The 20th anniversary of the human genome sequence: 2. Finishing the sequence 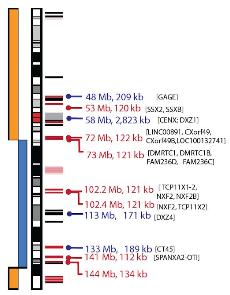 It's been 20 years since the first drafts of the human genome sequence were published. These first drafts from the International Human Genome Project (IHGP) and Celera were far from complete. The IHGP sequence covered about 82% of the genome and it contained about 250,000 gaps and millions of sequencing errors.

Celera never published an updated sequences but IHPG published a "finished" sequence in October 2004. It covered about 92% of the genome and had "only" 300 gaps. The error rate of the finished sequence was down to 10-5.

We've known for many decades that the correct size of the human genome is close to 3,200,000 kb or 3.2 Gb. There's isn't a more precise number because different individuals have different amounts of DNA. The best average estimate was 3,286 Gb based on the sequence of 22 autosomes, one X chromosome, and one Y chromosome (Morton 1991). The amount of actual nucleotide sequence in the latest version of the reference genome (GRCh38.p13) is 3,110,748,599 bp and the estimated total size is 3,272,116,950 bp based on estimating the size of the remaining gaps. This means that 95% of the genome has been sequenced. [see How much of the human genome has been sequenced? for a discussion of what's missing.]