A physiologist thinks about evolution 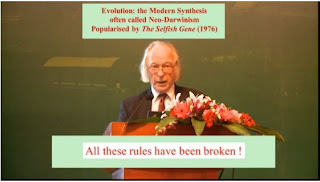 Denis Noble is a physiologist at Oxford University (now Professor Emeritus). He is famous for his work on the physiology of the heartbeat and he is touted as one of the founders of systems biology.

Denis Noble wrote a book on evolutionary theory called The Music of Life. It's featured on The Third Way, a website created by James Shapiro to promote his version of a paradigm shift in thinking about evolution. All the usual suspects are represented on that site.1

Here's how the book is described on that website .... 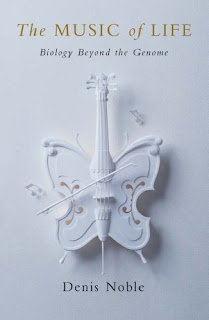 What is Life? Decades of research have resulted in the full mapping of the human genome - three billion pairs of code whose functions are only now being understood. The gene’s eye view of life, advocated by evolutionary biology, sees living bodies as mere vehicles for the replication of the genetic codes.

But for a physiologist, working with the living organism, the view is a very different one. Denis Noble is a world renowned physiologist, and sets out an alternative view to the question - one that becomes deeply significant in terms of the living, breathing organism. The genome is not life itself. Noble argues that far from genes building organisms, they should be seen as prisoners of the organism.

The view of life presented in this little, modern, post-genome project reflection on the nature of life, is that of the systems biologist: to understand what life is, we must view it at a variety of different levels, all interacting with each other in a complex web. It is that emergent web, full of feedback between levels, from the gene to the wider environment, that is life. It is a kind of music.

Including stories from Noble’s own research experience, his work on the heartbeat, musical metaphors, and elements of linguistics and Chinese culture, this very personal and at times deeply lyrical book sets out the systems biology view of life.

I haven't read this book and I don't intend to read it. Having listened to a lecture by Denis Noble (below) I don't think I'm going to learn anything more by buying the book.

I urge you to watch the lecture. It's the plenary lecture at the International Conference of Physiological Sciences in November, 2012. Denis Noble is the President of the International Union of Physiological Sciences. The lecture is only 30 minutes long but it gives you a good introduction to the way many scientists from outside the field of evolutionary biology are thinking about evolution (and the Central Dogma of Molecular Biology). It's not a very pretty picture.


If you want a brief summary of what's wrong with this lecture see Jerry Coyne's blog website post: Famous physiologist embarrasses himself by claiming that the modern theory of evolution is in tatters.