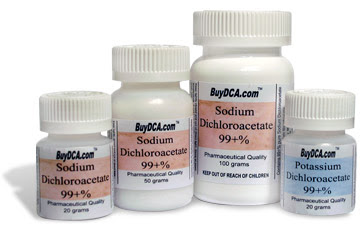 Dichloroloacetate (DCA) is a potent inhibitor of pyruvate dehydrogenase kinase [Regulating Pyruvate Dehydrogenase]. There have been suggestions in the scientific literature that the inhibition of this enzyme may lead to the death of cancer cells.

Over the years a minor cottage industry has grown up around the synthesis, sale, and promotion of DCA as a magic bullet for the cure of cancer. The lure of the drug is enhanced by the fact that it is so simple and can't be patented. Thus, according to its proponents, the drug companies don't want you to know about this fabulous cure because they can't make a profit. Abel Pharmboy at Terra Sigillata has written a lot about this drug [Perversion of good science].

THEME:
Pyruvate
Dehydrogenase
The problem is that the clinical trials have not been done and there's some danger of toxic effects when you take too much of the drug. The websites that sell DCA claim that it's only for animals but nobody is fooled by that ruse.

Now, according to New Scientist the FDA has ordered the main DCA website to cease selling DCA ['Cancer drug' site shut down]. When you go to the site at buydca.com you read the following disclaimer, " It is against US government law to sell substances with the suggestion that they are cancer treatments unless they are approved by the FDA."
Larry Moran at Friday, August 31, 2007
Share